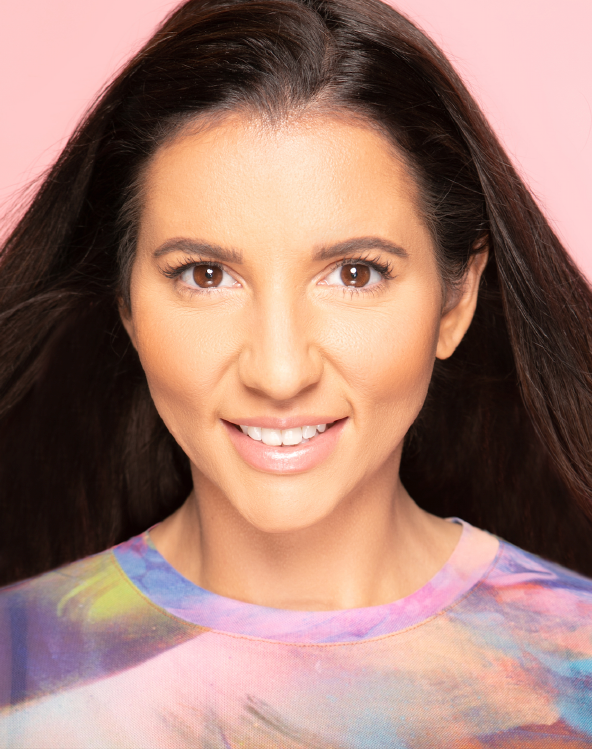 I’m a young and upcoming artist from Cleveland Ohio. I am painter and also trying to break into the performing arts of acting and modeling.

I love the positive and negative spaces that help create visual arts, like painting. Dark and Light passage combined with Line create Strong work that gives are about realities that I abstract in an expressionistically. Artists like Matisse, Georges Roualt and Jasper Johns continue to influence my work.

I want people to be feel invited into a world of beauty and light and imagination when they engage with my work.

Grace is an artist whose work engages one immediately. It resonates with the viewer in a dance of shapes that sparkle and communicate joy depth, and meaning. 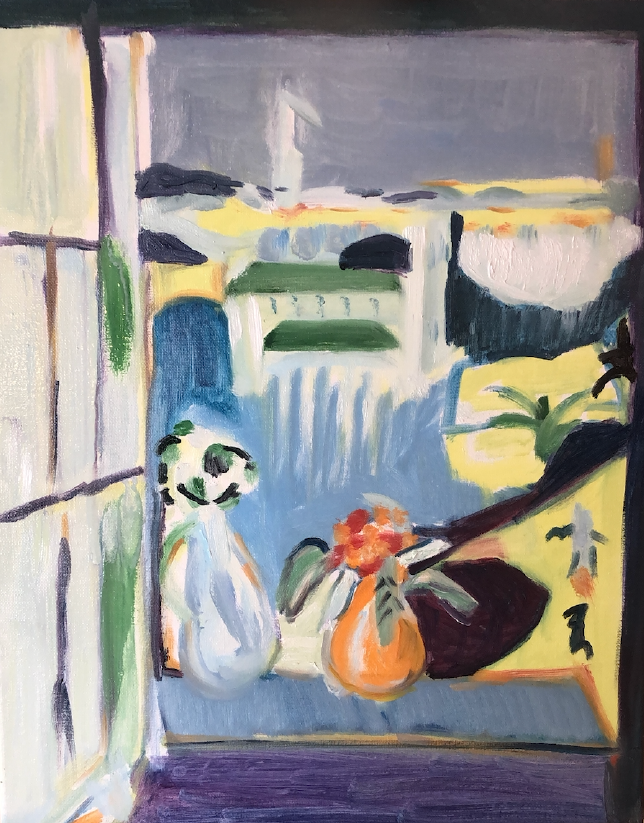 See Grace with a photo of her work which was auctioned off on behalf of the Cleveland Museum of Art. The lucky lady to the left out bid eight different people for the prize of Grace’s painting. Grace has started a series of the nude here is an example. 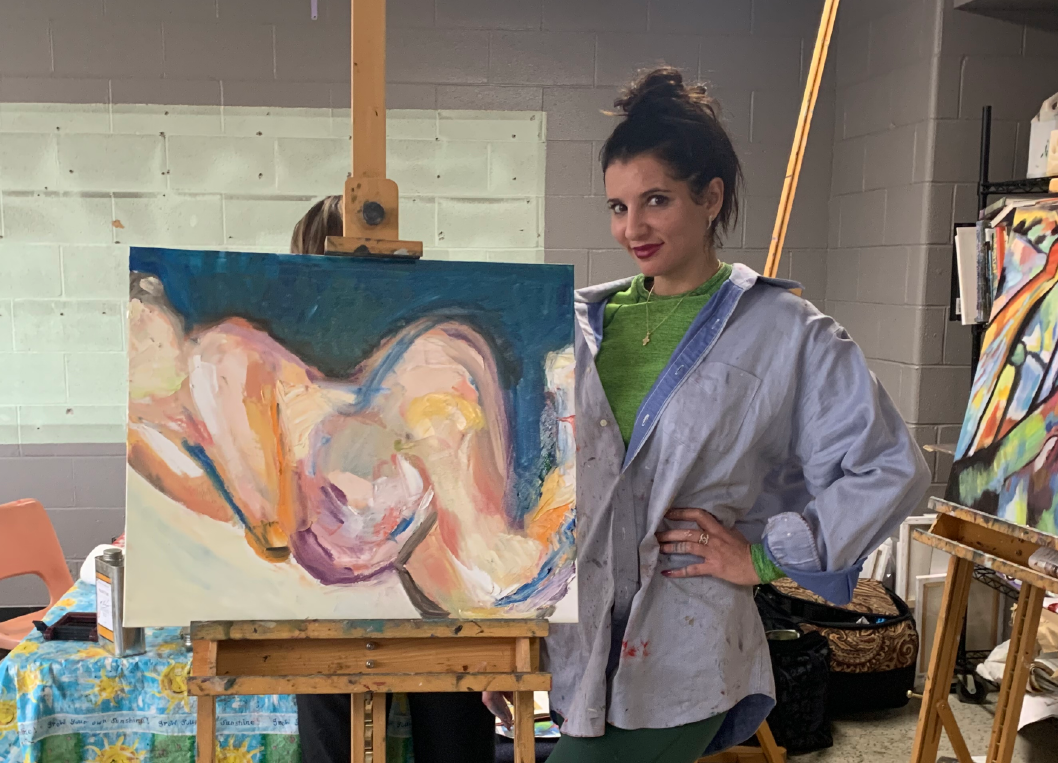 Grace has started a series of the nude. Here is an example 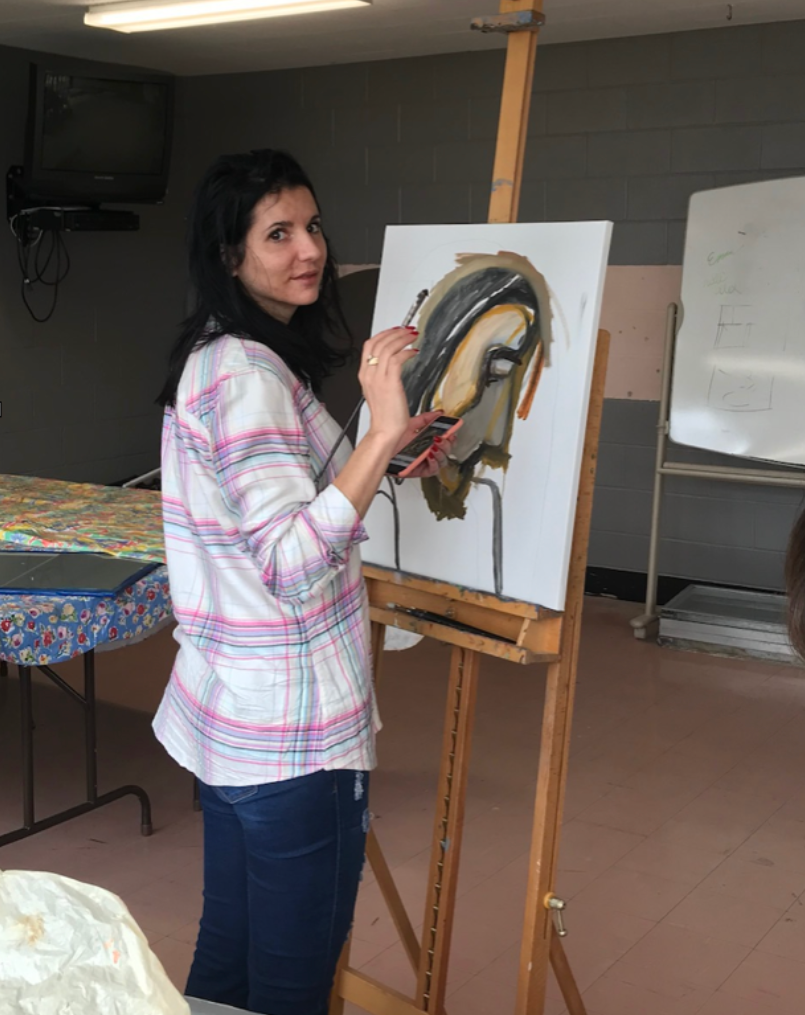 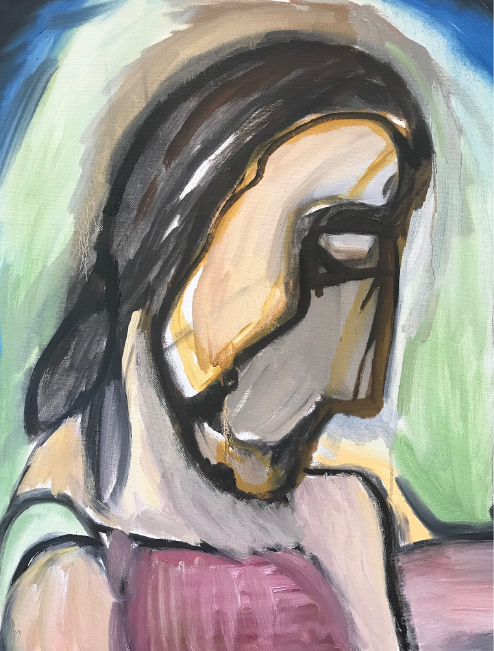 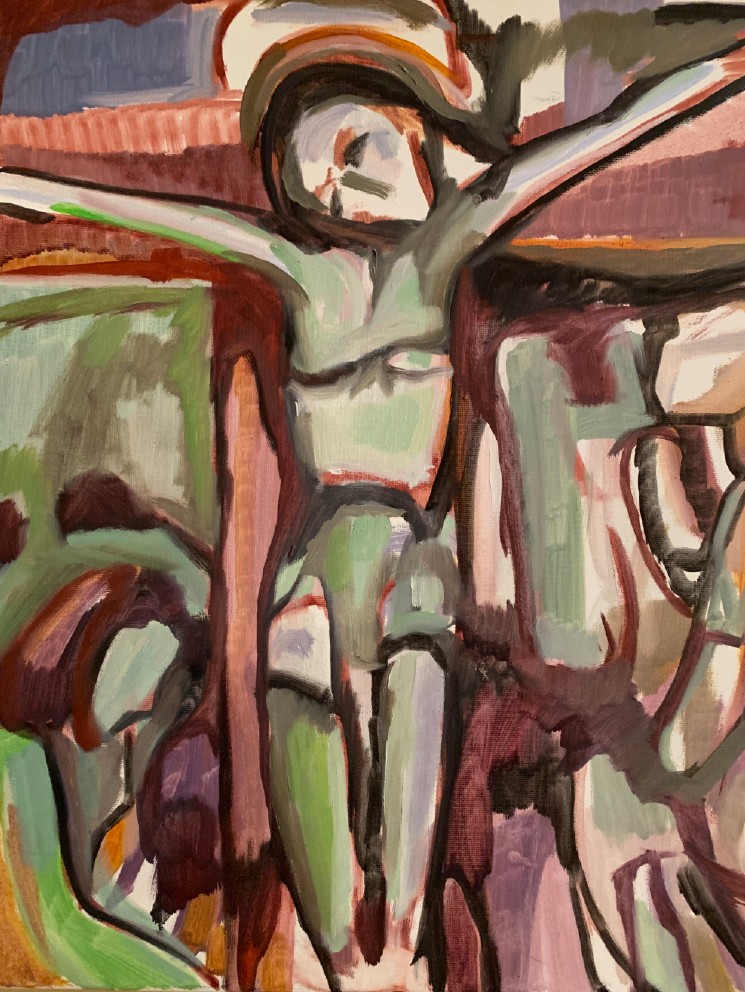 Grace’s work has matured substantially in the last two years. Her work was too sensitive and tried to communicate to much.

Now Grace’s work is made up of shapes, nuance and sensitivity are conveyed within the value structure of the work.

You will see the sequence and growth in Grace’s series of flowers. One can almost smell their scent!shapes.

This is the path to success. Congratulations Grace Cascarilla 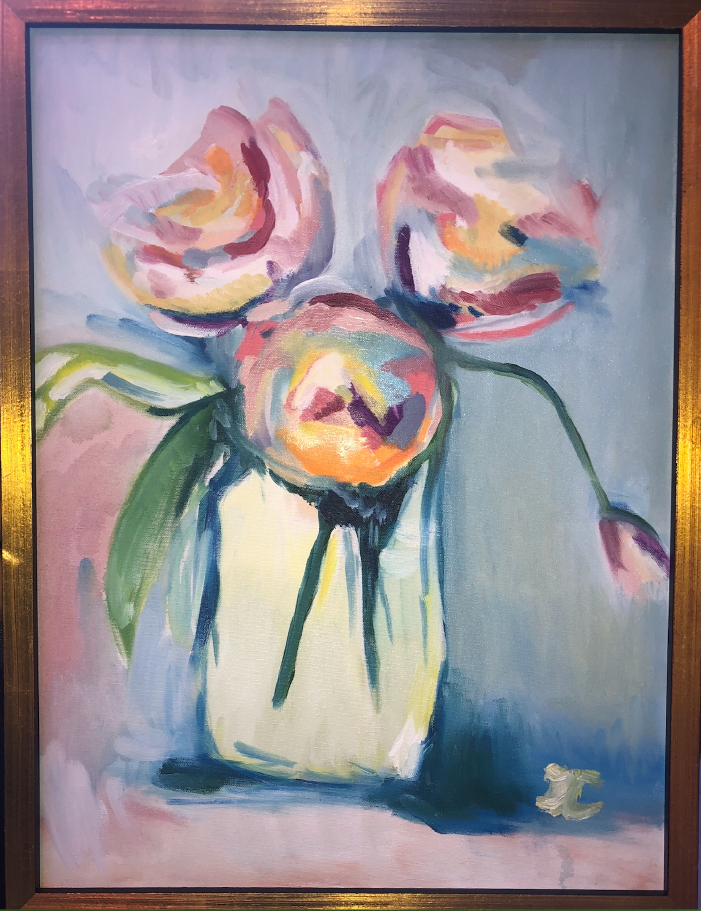 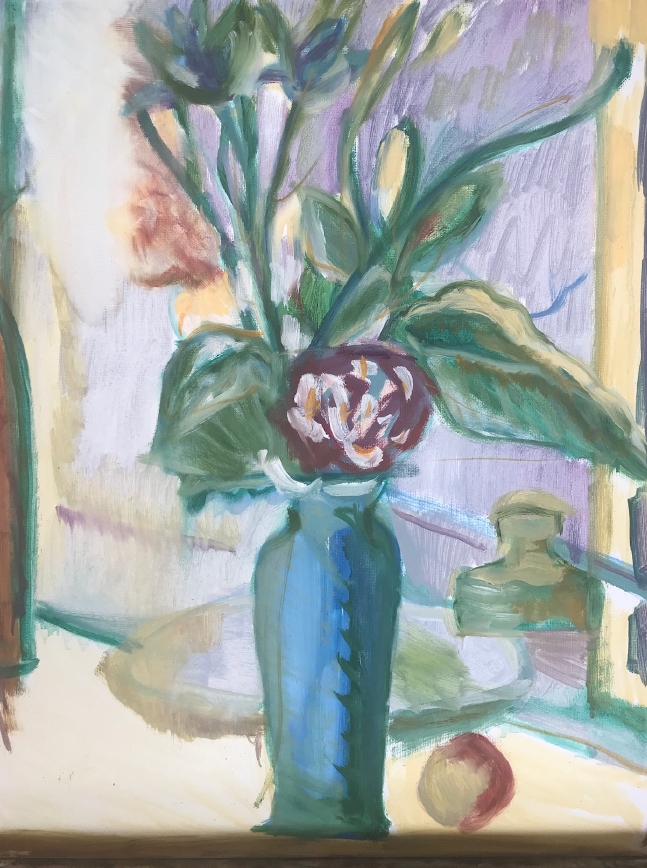 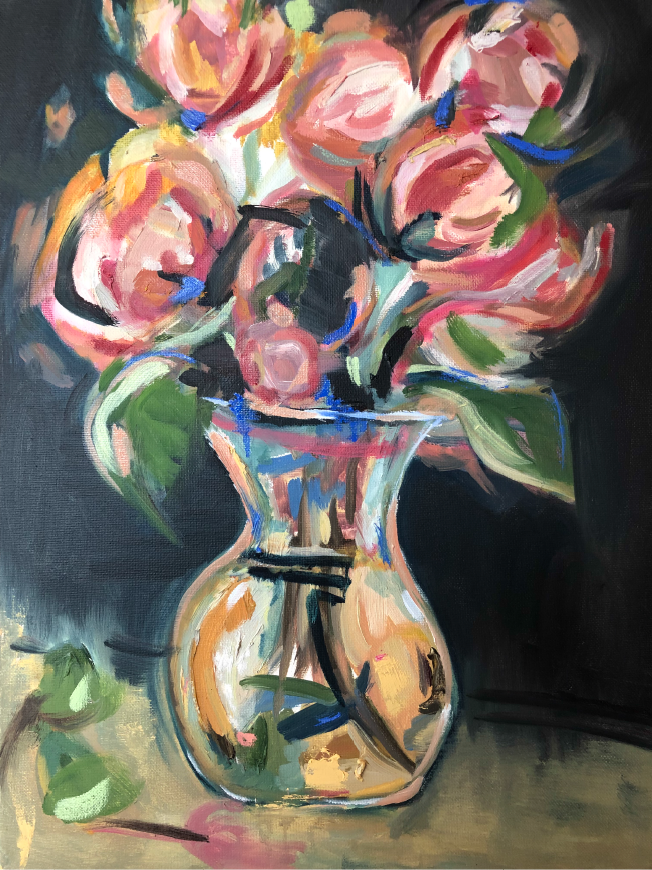 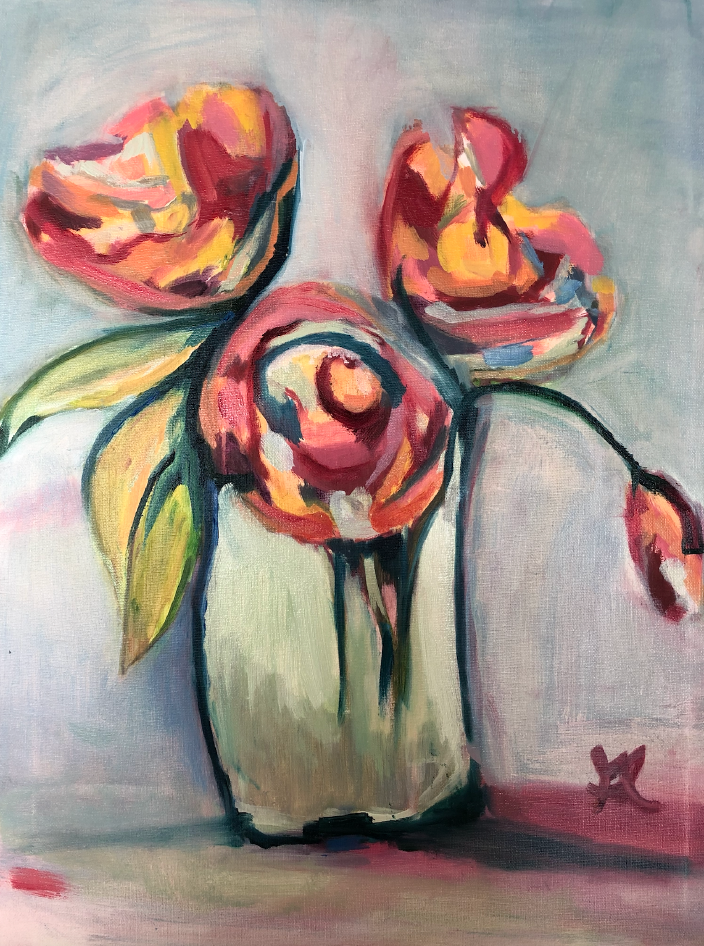 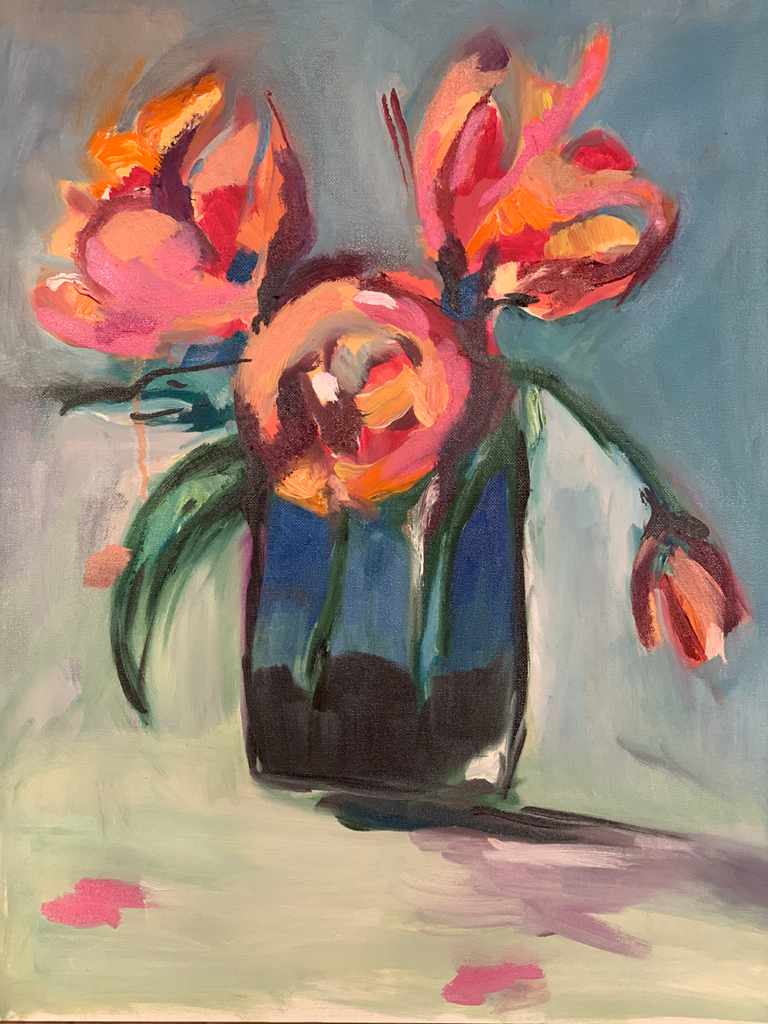 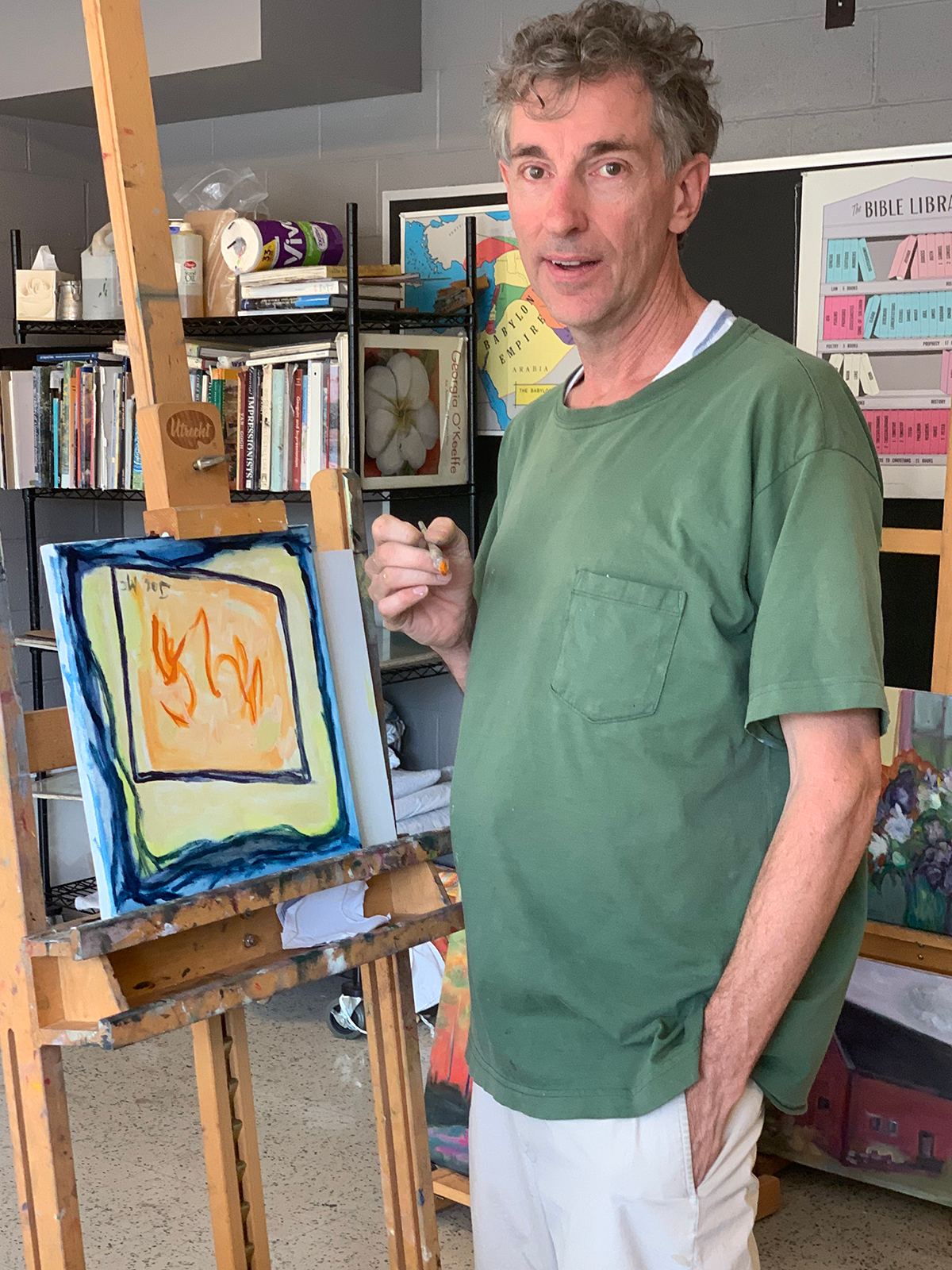 You’ve met Joe about two years ago. His work is stronger, bolder and more succinctly organized. Joe is a born story teller and his paintings convey depth, strength and sensitivity in theme and paint handling. His paintings are multi-layer. They engage the viewer into his/her own revelry and thoughts.

Joe’s work is classic, creating reflection and response in the viewer. Artwork is a dialogue between artist and audience. As one can see, his work is not didactic but allows the view entry and exploration in their experience.

Some paintings were almost monotone early on. Then one cold winter I started to counter with more vibrate color to force myself to have more light and positive emotion. Various forms of yellow I find calm in. When i re-purpose a painting that was drab I will add more colors probably from sun conscious.

The process of painting abstract or expressionist is like navigating on the high seas or out in space until some solid forms arrive. Maybe its trying to find clarity… I could call all my abstracts “A glimpse of sunshine trying to get through.”

The class setting is a positive energy. Everyone gets lost in there painting until the right shapes begin to make sense. Certain images from magazine or other random paintings strike an emotion I find needs to be combined to form a new image…its like falling in love with a beautiful person that you never see again but the image in your mind remains. 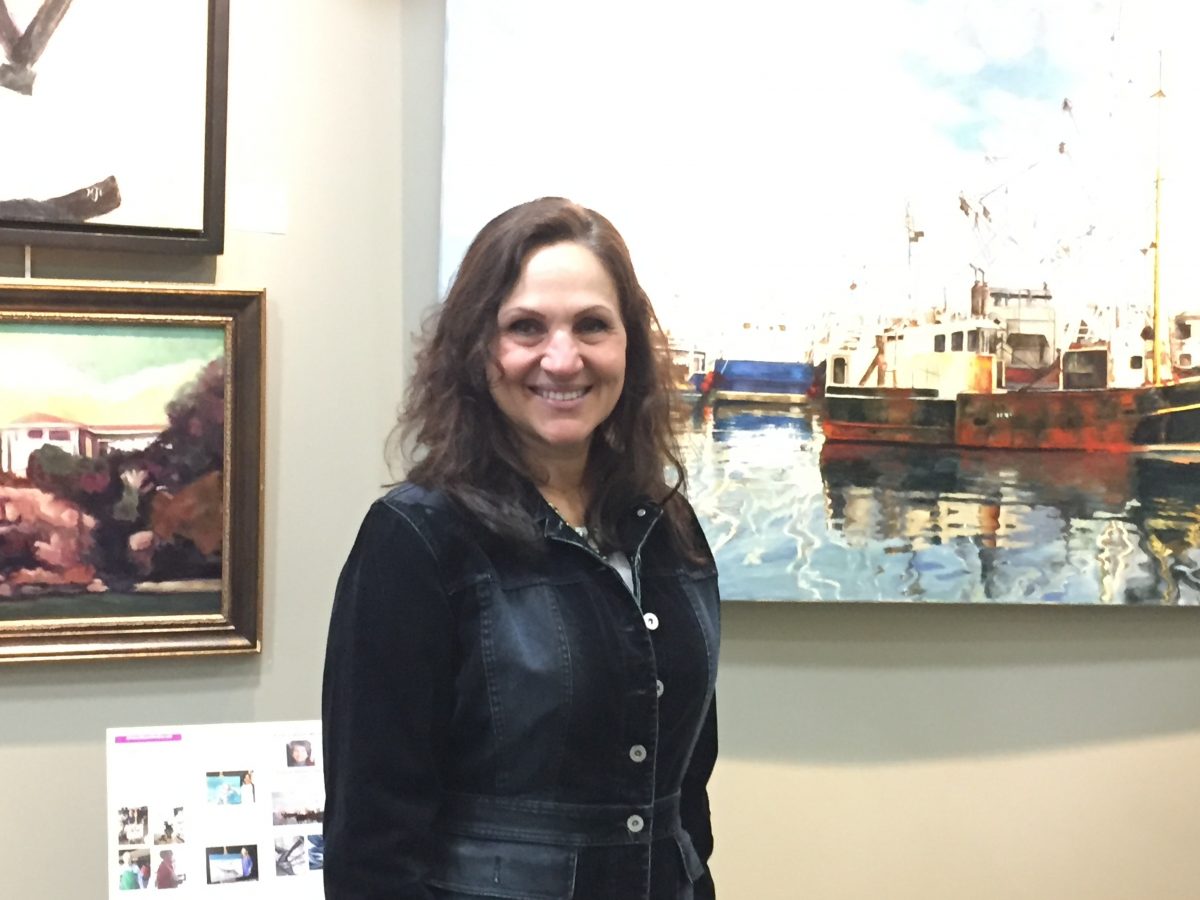 Artist in Bloom is a community of painters each learning their own method and expression of oil painting under the direction and expertise of Virginia Cascarilla. I started painting with Artists in Bloom 4 years ago. It has been a journey of self-discovery with my fellow artists as companions and Virginia as an advisor. Painting is an ongoing relationship where patience, time and an open heart yield learning, expertise and beauty.

Who is this magnificent Artist, Sophia Totjos?

Sophia joined our community about four years ago.  She followed each step in my 16-week program for understanding value in hues and designing a canvas.  After that, she soared on her own with her own vision.  It is best exemplified in her latest work which is one of compassion for refugees into Greece.
This image resonated with Sophia who is of Greek extraction as well as a human who understands the vagaries of life.
In this painting, one senses the sweep of immigration which is subtly and not so subtly bringing change to one’s sense of order.  We are living in a time of historic change. The integration of different cultures with our own is a difficult birthing process.  This evolution and its success depend on our own good will regardless of where we are in the political process.
Sophia embraces each painting with humility and quiet confidence.  She paints in the Grisaille method: the term grisaille stands for a monochrome painting or under-painting usually created in shades of gray or neutral grayish colors. Over this Sophia adds glazes of color.  This is a classic approach perfected by Davide and Ingres in the mid eighteen hundreds.
Sophia makes a relatively accurate sketch which considers the design of the painting.  Each work is designed to move the viewer’s eye to rest on important areas. 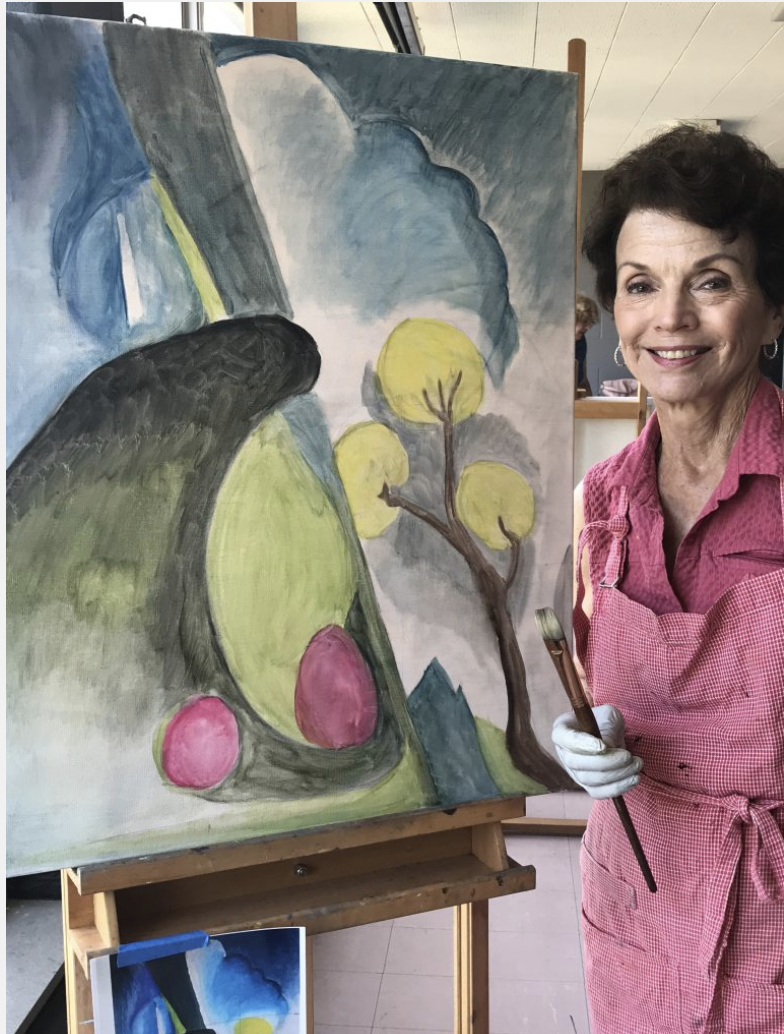 Connie is an old soul who was painting with pastels when we first met and her intuitive sense of balance, design and color was evident. We met at St. Peter’s Church, later to become Saint Peter’s community where we are encouraged to seek God and find God in ourselves and others. This is what we try to do in our Artists in Bloom Ministry/Community.

Connie learned our unique methodology for mixing hues and creating values for her first abstract painting. From there she studied the work the works of Monet and Renoir. With Connie’s love of nature and the ephemeral style she developed, it was clear that Georgia O’Keefe would offer Connie Inspiration and added guidance on her journey to develop an her own vocabulary and style. The paintings below will chart Connie’s course from beginner to professional.

Connie’s growth is steady and strong. Perhaps the most difficult idea for Connie and us all is trying to paint strength, conviction and light into a painting. It is counter-intuitive, but the darker the darks, the lighter the lights become. Chiaroscuro is the name of this method and Rembrandt is most often associated with Chiaroscuro.

Another challenge for artists is the willingness to keep with the journey of the painting when it isn’t what you wanted when you wanted it. As in life, painting is a process; there is struggle, there is resolution and there is joy. This process and cannot be rushed.

As an art mentor, we try to suggest a Master Artist whose work can light the path for each member in our community. If you want to be a heart surgeon you don’t simply start cutting into the heart, you study other Cardio surgeons anatomical techniques. After a few weeks, it usually clarifies which artist may be a mentor at this time on your journey. This holds true for seekers of God. At first we may use Our Book, then one may be interested in other theological writers Victor Frankel, then Jung, then Teilliard de Chardin and Rumi.

Connie’s paintings are not in Chronological order.  We can see her progress from painting a reproduction of something to capturing it’s essence. 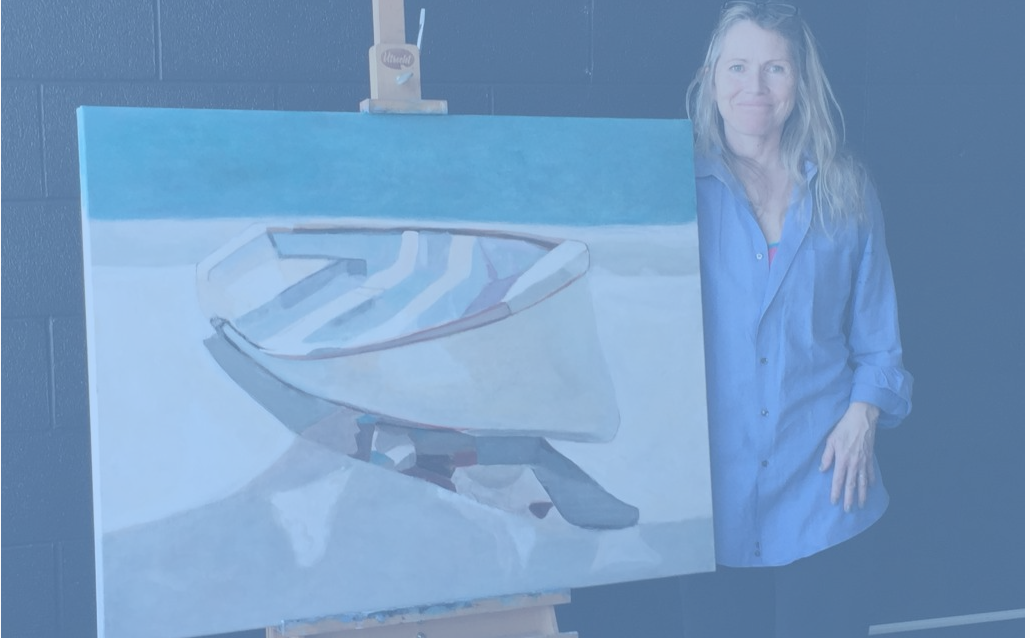 Upon meeting Karen Doyle for the first time it became immediately apparent that she is both an artist and old soul.
Karen joined our community of Artists in Bloom to develop a visual vocabulary of value and shape. She does this and adds joy to our group.

I am so grateful that Virginia recognized the artist in me which, without her encouragement, would have likely remained dormant within me. It is through her continued inspiration and guidance that what I paint resonates with me and how I want to express myself. This feeling of connection is a reflection of my inner life, what I enjoy, a tool for self discovery and expression. In essence I have found my creativity, my voice and my soul. I am inspired by the magnitude of sheer beauty found all around us in nature. Even in the simplicity of a single flower. And I love providing a tangible mirror in which others may recognize the beauty of their world.

All beauty comes from love. It is the face of God, where spirit and form meet. The heart feels what the eye sees. It is all around us, we just need to pay attention. 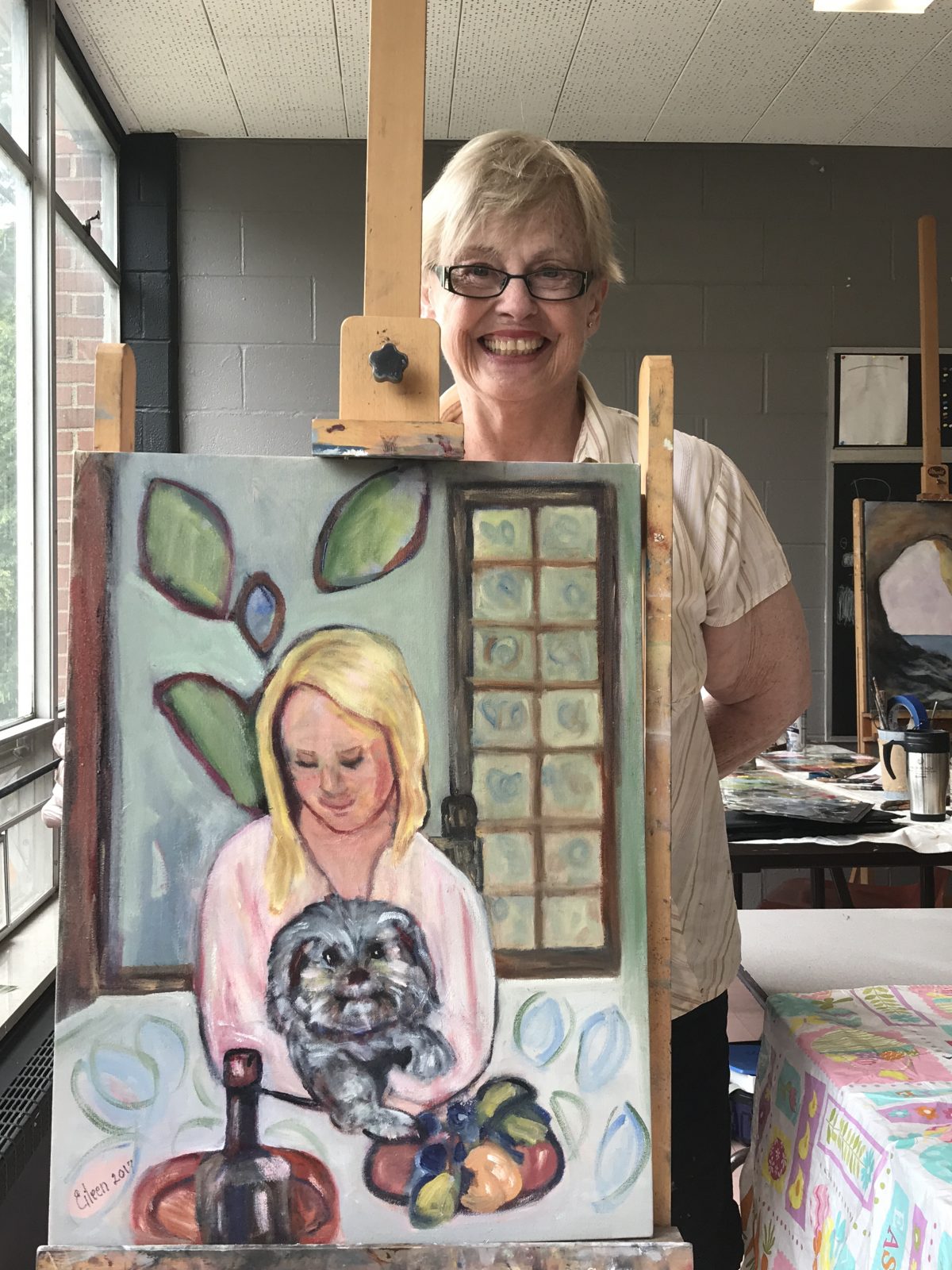 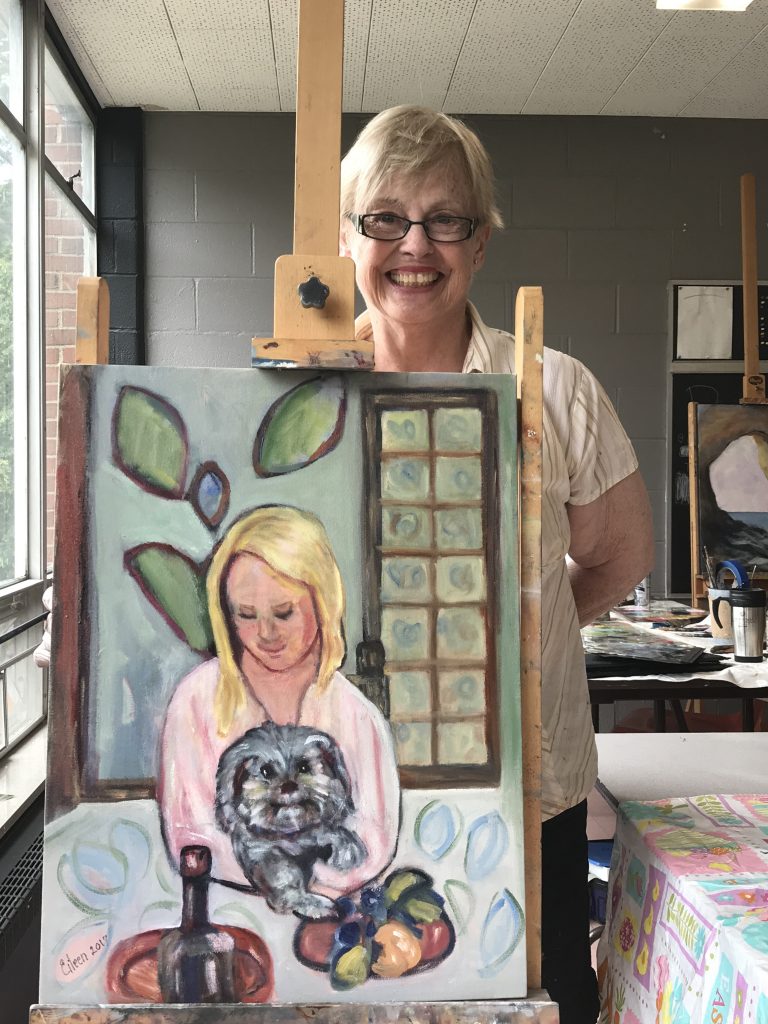